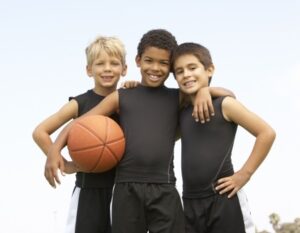 Despite what you might see on the news, especially when rival sports fans get into fisticuffs after a football game, athletic competition brings people together. Sometimes sports are the only thing all Americans can agree on, meaning everyone has their favorite teams, the athlete they put up on a pedestal, and so forth.

Sports can, and oftentimes does, eradicate differences and remind us that we are all human and in this thing called life together.

Basketball and tennis are two such sports that unite rather than divide and at Classic Turf Co., we take pride in the fact the courts we construct and install can help heal wounds.

We read a story over the weekend that demonstrates the unifying qualities of basketball and it put a smile on our faces. Down in Florida, a group of children got into a little trouble for being too loud while playing basketball. Neighbors put in a noise complaint with the local police department and when police arrived, they saw nothing wrong. On their Facebook page, they said the children were simply having a good time and no crimes were being committed. In other words, kids were being kids.

One officer in particular even shot hoops with them and the video, predictably so, went viral. The officer’s good deed caught the attention of former basketball great, Shaquille O’Neal. According to ABC 15, “Shaquille O’Neal surprised the children and played a game of basketball with them along with White.”

That is a very nice gesture on the part of O’Neal and what he did is something these kids will never forget. That is the power of sports; it has the ability to bring people from all lifestyles together. If you are feeling that your community or neighborhood lacks that “unifying force,” consider having one of our fine courts installed. Who knows? Maybe Shaquille O’Neal will swing on by…