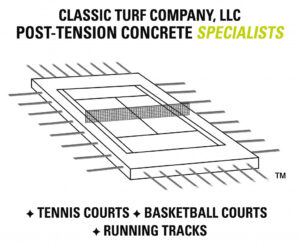 In the turf world, concrete largely hasn’t been playing much of a game for people. We see it more as something for foundations in housing and maybe a cheap way for a basketball court to be set up, but we see more people going for the classic turf with the rubberized design since it tends to be less damaging to people than concrete. But there is one type of concrete that is used in certain circumstances and that is the Post Tension Concrete.

So what is so special about this stuff that people would even want it, especially over our classical turf? Well the key is in where the concrete can be placed. Post tension concrete can rest on any surface, including and especially for unstable soil or expansive soil. This kind of soil often expands due to the bits of clay that can be found in it, and this expansion would ruin some turfs as well as normal concrete.

But there’s nothing truly special about the concrete, it is simply the method that is used to pour the post tension concrete in. Pathways are created along the entire expanse of the concrete area and then tendons for a hydraulic jack are placed throughout those pathways. With the jack turned on stress and tension is purposely placed on the concrete in counter to the kind of tension it would get from the clay-based soil. The tendons are left in after the jack has done its job, but the jacks are removed, and the tendons are placed so they retain their tension on the concrete permanently.

The entire process provides a few benefits beyond just being able to be placed on troublesome soil. You can also place this stuff over a previous turf or basketball court or anything and it will retain its shape and have no problems including cracks. It’s also less damaging when concrete might chip or be damaged, as there is no rebar in the formula like you might see with reinforced concrete. It’s also more likely to handle drastic changes in seasons too, such as rain or snow one day and bright sun the next.

Overall Post Tension concrete has a number of features that has made it perfect for replacing or making new tennis courts or basketball courts, and if you really want, you can even add the classical turf over the concrete.