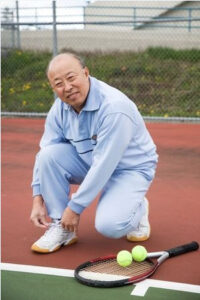 If you’re going to play tennis on a tennis court, you should wear tennis shoes.

Here’s the problem, though– people generally have no clue what the differences are between tennis shoes, sneakers, athletic shoes and trainers. Aren’t they all pretty much the same?

Ok, what do all the aforementioned footwear types have in common? They’re generally rubber-soled shoes people wear for activities like exercising and running and… tennis. They are almost always made of canvas with nylon or leather parts and laces on the top of the foot.

“Sneakers” got their name back in the late 1800s because of their soft-soles which allowed school boys to wear them and literally “sneak around” places. The term “sneaker” first appeared in dictionaries around 1895.

Tennis shoes, on the other hand, date back further to the mid-1800s. Originally called “Plimsolls,” they were lightweight, flexible, and a luxury item. People with money could afford tennis shoes specifically to play tennis, while the vast majority of working class stiffs could only afford one or two pairs of general shoes for everyday life.

So what constitutes “tennis shoes” today? If you go to the store and they’re labelled “tennis shoes,” that means they’ve been designed to allow for quick starts and jerky lateral movements across a flat tennis court surface. Their soles are made of rubber and won’t leave skid marks on the court. The uppers are made of nylon or leather to support a person’s ankles. Finally, take a look on the sole of the shoe and notice if there is a “herringbone” pattern. If so, those are tennis shoes, designed for use on tennis court surfaces. The herringbone pattern is an arrangement of rectangles often used for floor tilings and road pavement, and it’s named for a fancied resemblance to the bones of a fish such as a herring. See examples here: https://en.wikipedia.org/wiki/Herringbone_pattern

While tennis shoes are for tennis, sneakers are worn for various sports as well as for everyday purposes such as going to school or the store.