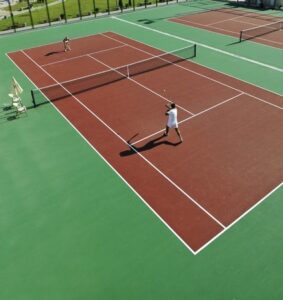 Each type of field is given a letter associated with what that court is made up of, as well as a number that determines what kind of speed of play you can obtain on that court type. The three most common court types we see today are clay courts, grass courts, and hard courts.

Clay courts don’t see as much play in the tournaments because of the way it interacts with the ball. The clay slows down the ball, but provides more bounce to it; this means certain kinds of tennis players, such as ones that focus on having a good serve can end up doing a lot worse because when the serve bounces, it is slower and higher up. Clay courts are given the letter F and are placed around a category of two, which makes them rather slow, but not the slowest.

Grass courts on the other hand see plenty of play because they offer some of the fastest play available in the sport. They are given the letter H and a categorization of five. These types of courts usually see the serving Tennis players taking matches more than any others, as they can serve and volley rather quickly and not give their opponent enough time to react. However, more recent grass fields have been appearing in tournament play, in which they have been tampered with to make them much slower than you’d normally expect. This has led to serving players not doing as well, especially in tournaments such as Wimbledon.

Finally, we have the hard courts that are probably the most common among non-professional play. The hard courts are always made of synthetic materials of some kind and are around a middle ground in terms of both speed and bounce. They are given a variety of letters based on what type of material they have been made with and whether that material was made to look like something like grass. They also tend to fall in a fluctuating category range from two to four. Hard courts are the kinds of things we provide and they tend to be easy to maintain which is a bonus over the clay and grass courts that require constant maintenance.